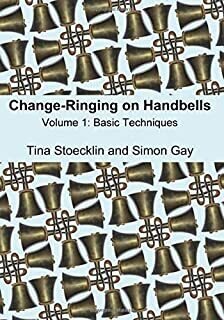 In 1974, Frank King, the Cambridge University Bellringer, in his 24-page pamphlet, “Ringing Elementary Minor Methods on Handbells,” asserted that “a plain course of Bob Minor... can be mastered by many people within 25 minutes of knowing anything about ringing at all.”

Perhaps such feats are common with a gifted tutor like Dr. King, and a steady band of spry, young Cambridge students surrounding the equally spry learner. Handbell ringing in North America has characteristics that make such rapid progress more difficult: teachers with less experience, bands starting from scratch, and ringers existing in relative isolation.

Until recently, Dr. King’s short pamphlet was one of only three works that might serve as guidance for a fledging handbell band. Like it, the other two are decades-old booklets of only a few dozen pages each: “The Beginner’s Guide to Change Ringing on Handbells” by William Butler and “Change Ringing on Handbells” by C W Woolley, both available from the Central Council. All three of these booklets have served handbell ringers well, including this ringer. But there remains a need for a modern, book-length textbook of handbell ringing, written in a less formal style and comparable in scope to available materials for tower ringers, such as the outstanding The New Ringers Book (John Harrison and Catherine Lewis, CCCBR, 2010), and the venerable works of Steve Coleman.

Tina Stoecklin and Simon Gay have brilliantly filled this void with their new tome, Change Ringing on Handbells Volume 1: Basic Techniques. Weighing in at a whopping 206 pages, unlike the King, Butler, and Woolley works, it leaves nothing out in guiding aspiring handbell ringers from rounds through Double Norwich, and every point in between. Stoecklin and Gay’s contribution to the exercise might even be used as a single-source text to develop a new handbell band from scratch, with only minimal help from someone of modest experience. One might even suspect that the authors are uniquely familiar with the challenges facing handbell bands in North America. In fact, Ms. Stoecklin is American by birth and learned to ring in Kalamazoo. She and Gay are no doubt aware that here, the nearest experienced handbell ringer might be 1000 miles away, so the more that is explicitly explained, the better.

Special attention has clearly been paid to the notion that individual handbell ringers have different ways of approaching the art. Clean, colorful diagrams are always accompanied by clean, colorful prose, appealing to multiple learning styles. Grids are introduced early in the text, and place notation is carefully explained at length at a very appropriate time. In the penultimate chapter, using Double Norwich as an example, fourteen pages are devoted solely to explaining, in glorious detail, how to approach learning a new method in six different ways with accompanying diagrams: place notation, the grid, the blue line, the blue line with treble passing, place bells, and structured pairs of blue lines. Ultimately, we are encouraged to “play around with different ways of learning it, and pick the one that works for you.” Indeed.

If the work has a weakness, and it is truly a struggle to find one, it is that conducting feels thrust upon the reader without quite enough explanation. Plenty is explained, but a budding conductor will likely find that a companion text, such as Coleman’s Bob Caller’s Companion, is desirable.

One of the most beautiful aspects of our art is that it is a hands-on tradition, largely passed down in person from teacher to student for centuries. My teachers had teachers, and those teachers had teachers, until we all theoretically end up being able to trace our lineage back to the same small group of innovators in the 17th century. Because our art developed this way, it is nearly impossible to learn to ring from a book. For handbells, at least, this book comes pretty close. We are lucky to have Ms. Stoecklin and Mr. Gay as our teachers.

Change Ringing on Handbells, Volume 1 by Tina Stoecklin and Simon Gay is available in paperback and e-book editions on Amazon.com for $29.50 and $9.99 respectively.