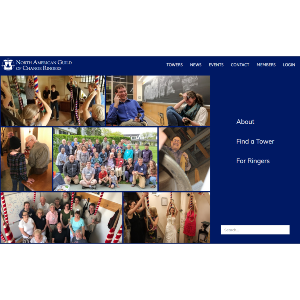 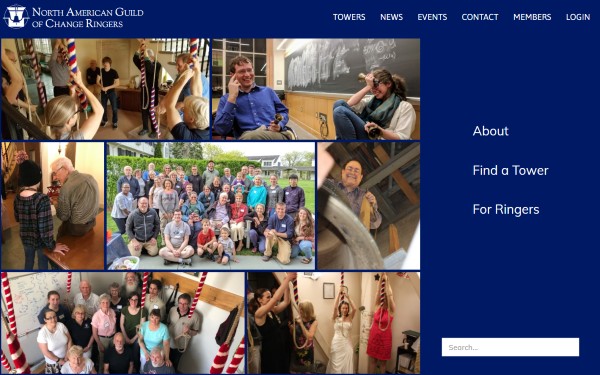 After over a year of effort, the new NAGCR website is ready for a member preview!

The .xyz domain is being used for preview purposes, only. When we are ready, the site will be moved over to nagcr.org and the existing site retired. We anticipate publishing it within two months.

Several things. First, photography has been given a much more prominent place. Images of ringers are front and center to help attract new interest in the exercise. We made a conscious decision to focus on people, not towers and bells.

Second, and with that said, lots of effort was expended locating large, well-shot photographs of each tower on the tower page. This is consistent with one of our goals: to really drive visitors to explore our towers and reach out to a band near them. The tower map, long a broken feature of the current site, has been updated.

Third, behind the scenes, the site is built on an entirely new platform. It is designed to be editable by multiple people, and can even be re-designed without tremendous technical expertise.

Fourth, you can now pay your dues online!

Why do we need a new site?

The existing site has served us very well, and the Guild owes the current webmaster, John Danaher, a huge debt of gratitude for his work on it over the years. But there are several problems:

First, the design of the site is dated. It needed a freshening-up.

Second, things were starting to break. The most obvious example is the tower map. It has not worked for years due to a change in how Google Maps work.

Third, and most importantly, the site was built on custom-written code that only John Danaher understands or even has access to. As he has gradually (and hopefully temporarily) been less involved in ringing, keeping the site up-to-date and functioning has become impossible. There was a need to rebuild the site on a new platform that can be more easily handed off to someone else if the webmaster goes AWOL.

Will it do all the things the old site did?

Yes and no. Most of the major features of the old site have been replicated in some form. However, because the old site was custom-programmed to meet our exact needs, no site using off-the-shelf components can entirely replicate all the bells and whistles.

For example, users could directly update content on the old site themselves. Articles, events, and tower updates submitted appeared instantly. The new site is not that sophisticated. Users can still submit articles and other content updates, but these changes will not appear until the webmaster or an editor does an update. Members can submit updates to their contact information, but these updates will not appear in the directory until the membership secretary processes the changes.

Also, the old site had several different types of serial content: articles, announcements, member discussions, and event reports each had their own categories. The new site just has one: news & articles. Because some of these categories were under-utilized, we feel this simplification is an improvement.

Yes. Three features remain behind the member wall: the member directory, The Clapper, and annual reports. Member accounts have not been moved over. This means members will have to create a new account on the new site to access members-only content. You can do this yourself now, but anyone who has not signed up for an account on their own will be invited to do so in the coming weeks.

Give me the technical details, I can handle it.

The first prototype was built using Wix, which proved to have unsatisfactorily slow load times. We went back to the drawing board and elected to re-build the site on Webflow. Like Wix, Webflow is an all-in-one host, design tool, and CMS system. It is less intuitive than tools like Squarespace and Wix, but offers more granular design control and significantly faster load times. Otherwise, it is similar. Webflow shares some features in common with Wordpress, but Wordpress is primarily a CMS tool, not a design tool. Webflow is a WYSIWYG design tool integrated with built-in CMS.

It doesn't do it all, however. Member accounts are provided using Memberspace, and little bits of custom JavaScript make certain pieces work, such as the tower map and the member directory. For the most part, however, the site was built without a lot of coding. It can therefore be edited in the future by people who are not coders.

How much did the redesign cost?

The guild voted to allocate some considerable funds to re-design the website at the 2019 AGM. A few months later, I volunteered to attempt a redesign for free. The new site does involve some new monthly hosting fees, however, with the money saved on the design, the new site should serve us for another decade without exhausting the budget approved.

A website is never finished. A few features and pages are not fully built out, but will be by the time we publicly launch the page on nagcr.org. These include the education page and certain aspects of the book service. There are some features that are planned for future improvement. These include a true calendar for the events page, a cart and checkout system for the book service, and quarter peal and peal records.

Most importantly, it is not done without input from you, the members. Please share any comments with me that may be of use. You can email them to webmaster@nagcr.org.

You will also notice a few holes in the tower pictures. If you have any good exterior shots of any towers that lack them, please send them to me.

Anything you do not like is entirely my work.

Anything you do like is probably the result of input from my fellow members of the website redesign committee: Quilla Roth, Rick DuPuy, and Mary Platt. They are as much responsible as I am.

I am also indebted to various people who provided technical help, proofing, and other input, such as Ed Futcher, Don Morrison, Allen Nunley, Bruce Butler, Diane Amison-Loring, Carl Zimmerman, Ricky Morse, and several other people I am likely forgetting. I am deeply indebted to our previous and current webmasters, Mike Simpson, Sam Wilmott, Brian Zook, and John Danaher.

A few people deserve very special thanks for specific invaluable input. Leland Kusmer and Bryn Reinstadler provided me with design, spiritual, and philosophical advice that radically changed the whole project for the better. Miriam Dixon went above and beyond in providing me with review for accessibility issues, both from herself as well as her colleagues and students. And Field Baber, Symphony & Joe Romaine, and Faith Magwood allowed themselves to be featured in the "Meet a Ringer" section as representatives of who we are. You represent us well!

Finally, I would like to thank my wife, Sara Barnes, and daughter, Cara Brinson, both of whom put up with a lot to enable this to happen.